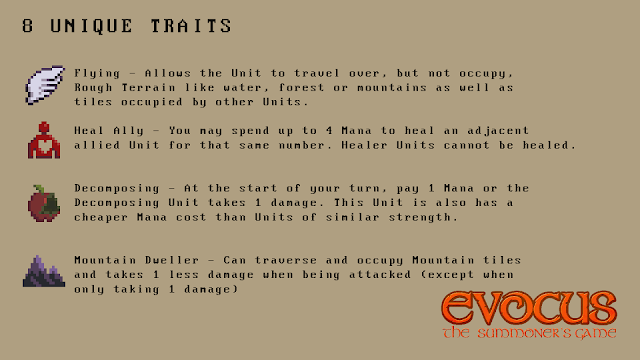 Since the concept finalizations of the first 26 Units, we've had eight Traits in play. Some have seen no changes in the recent months but others are on their second or third iteration and we are still not 100% happy with them yet.

The ones that have gone unchanged are Flying, Heal Ally, Decomposing, Mountain Dweller and Forest Dweller. Flying was easily the most intuitive and simple to create. The "Dweller" traits were a bit more complicated to do because we weren't initially sure whether the one less incoming damage buff was too strong but after a few play tests it seems to be a good balance.

You may notice that one trait on this first list is not really a positive trait and is instead makes the Unit a bit riskier to play. Decomposing for the Undead Rotters Unit is an example of our first functioning negative trait. Negative traits reduce the overall mana cost of a unit so a Unit with the same stats but no trait would cost a few mana more than its counterpart. The opposite is also true for positive traits as well. 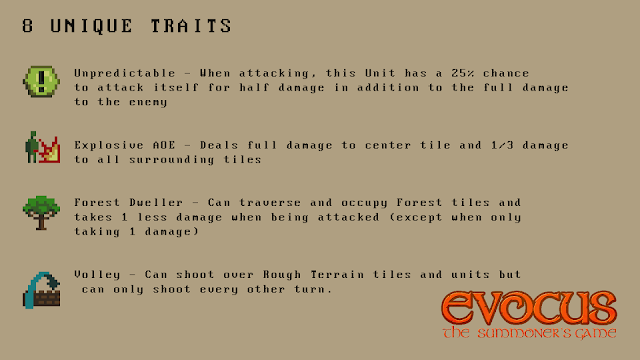 What Did Not Initially Work

Unpredictable, Explosive AOE and Volley all have undergone multiple iterations. Unpredictable, currently only used for Clumsy Ogre, was intended to be another negative trait focused on the idea that this incredibly strong creature also had drawbacks that meant he would attack either himself or friendly, adjacent Units every so often. Initially it was "attacks a random adjacent Unit at the end of your turn" so you would be inclined to keep him away from your other units and amongst enemies so you could have the chance of a double attack. This was a fun idea but the end of turn mechanic and attacking enemies twice made this not really balanced. We then tried having him having a chance to only damage himself at the end of a turn and that didn't really feel great either so we settled on having a chance to additionally attack himself when attacking enemy Units.

Explosive AOE was initially Collateral which meant that the Unit would take damage if it attack adjacent Units but we flipped it to a positive Trait and lowered the overall strength of the Grenadiers (the only Unit with this Trait). It does still maintain this need to keep Units at range since it can still damage itself with the splash damage but is overall pretty strong in it's ability to deal huge amounts of damage to clumped enemies.


The Future of Traits in Evocus

Moving forward, we really want to keep adding Traits in. They make gameplay more interesting and add lots of depth in deck building and tactical, strategic planning. We also really want to focus on creating more negative Traits since it feels like we haven't quite tapped into the true potential of Units having higher stats for their mana cost in return for having a negative Trait that you have to work around.

Some of the ideas we've been discussing are: Units that cannot attack but can instead explode and deal splash damage when they die, cloaked/concealed Units that are harder to hit at range, acid/bleed damage that is dealt per turn for a set amount of turns, life steal units that heal when they deal damage, as well as some Traits that have a one time effect  or interaction when the Unit is summoned or dies.

These ideas are all still just hypothetical at the moment and are always subject to be on the cutting room floor if they don't work. We're curious to see which of these Trait ideas you think would be cool or if you have original ideas, we'd love to hear them. Feel free to shoot us a tweet(@playevocus) or comment on our Instagram(@playevocus) or Facebook posts (Facebook.com/PlayEvocus).
at December 07, 2018