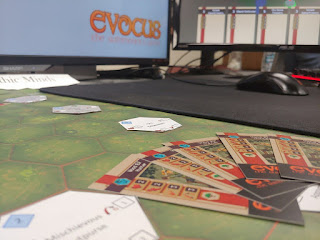 The Sac Gamer's Expo was technically my first ever event I attended as a game dev promoting an indie game. I'd gone to plenty previously but always as someone on the "opposite side of the booth." This particular event was about seven hours long from the time we got our booth set up until the time we started taking it down. We had a whole half of a table that equated to something like 6 square feet so we had to pack all of our materials in quite tight. Since a keyboard is not necessary for the game at this point we had to hide it behind the booth to save space and just have the mouse, mousepad, TV with the slideshow and monitor for the game on the table. We also were able to use our prototype game board and Unit pieces as a kind of set piece.

I'm not sure exactly how many people I talked to but it seemed to be at least a hundred and interactions ranged from just quickly handing out our promo cards to having full playtests and chatting pretty extensively about the game. We had people who were super into the game and thought it was great, people who thought the game was too far from the trending popular game model to be successful, people who wanted to help us with stuff and people who were outright not interested. I made sure to focus more on the positive feedback than the non-constructive negative feedback as I know those are the kind of things that can psych us out of finishing this game.

All in all, it was great to finally show off our game to so many people and have most of them receive it well and affirm that we're on the right track with our game. 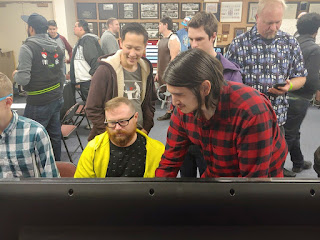 The image above is of me (in the purple hoodie in the back) talking with three local devs who work at EA Capital Games which is one of the two game studios in town. They were right there with me when they ran into a bug and I explained how the game should play out. They knew exactly what it was like to play an unfinished game and experience bugs and broken mechanics. For the most part, everyone who played was pretty understanding of the bugs and gave good feedback on how the gameplay can improve.

Interestingly enough, virtually all of the feedback we received were on things we had already discussed as a team. We heard people talk about the cluttered UI with Unit tags, how a Victory Point system could be cool, how building a deck would be fun, how it would be nice to be able to zoom in and move the camera around the battlefield. All of things were brought up by someone in our team and we've spent the past few months trying to figure out solutions to. Fortunately, we didn't get any "this game is not fun," "this game is too confusing," "this felt unfair," etc. Those comments are things that might put us into panic mode and force an existential crisis. Instead we know that our game has potential, a good amount of people thought it was fun, we all know it needs work and is far from done and a lot of people are as excited as us to see this game completed. 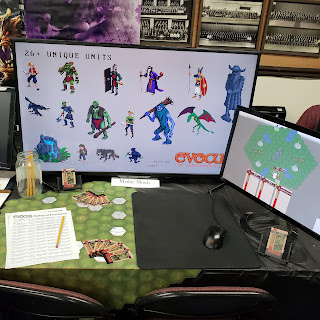 So to anyone who came by our booth, thanks for checking it out. Your feedback is always appreciated and we hope you continue continue to follow us as we build this game.
at December 17, 2018