From the very start of this project, I knew it would be much more complicated design-wise than any other indie game I've worked on due to the MVP (Minimal Viable Product) that we had to ensure was as simplistic as possible while still representing the core of the game.

The game started out as a WWII-themed military strategy/tactics game with infantry, vehicle, and flying units that had the same four core stats that we still utilize. In our very first playtest, my wife realized that there was no sense in building a deck with anything other than flying units since they could pass over everything and were no more expensive than the other Units. This was one of dozens of clear flaws that our first draft had that we eventually ironed out, iterated, and cleaned up until it became our current model.

You Probably Shouldn't Build a House Without Some Sort of Blueprints

I'm not sure who initially had this idea (either Jim, one of our programmers, or Jon, one of our artists) but it absolutely saved us so much time. Their idea was to build this whole game out on paper because it was A) way faster to get up and running, B) way easier to iterate and make changes on the fly and C) video games can't really make quick decisions on rules that you haven't thought of yet. This helped with problems such as if a player says, "Can I move twice if I have enough mana?" It's easier to say in person, "No, no double actions," instead of the game having no idea since you haven't given it instructions for that problem and it freaking out and imploding because computers don't like not knowing things. But back to the actual point, playtesting on paper for two months before we even wrote a line of code was super beneficial because when it came time to write that code, we knew that most of the major issues had already been ironed out and the game was safely in a state of non-brokenness. 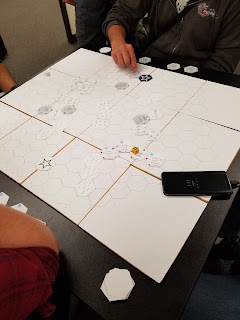 Evocus Turned Me Into a Spreadsheet Fiend

The image below was one of the early iterations of our Unit master sheet where we threw down ideas for Units as well as possible stat values and any special traits or abilities they could have. I don't feel like we're giving too many secrets away here since this sheet is super outdated and we have completely overhauled our entire Unit system.

This spreadsheet was one of the many that I built in order to keep track of all of the different things this game would include. We also have tracking sheets for art and audio, a final list of features for our MVP, lists of all of the rules, and notes from each of our seven major playtest sessions.

With a side-scrolling platformer, you probably wouldn't need this much, if any, documentation since you can kind of just start building once you have your core mechanics decided. With a strategy game, there's a thousand more possibilities for things to spin out into a state of imbalance.

The Grand Philosophy of Rules

If you take a close look at a lot of strategy games, particularly those from the 90s and 2000s, you'll see that a lot of them are incredibly deep and complex. They have tons and tons of options for things to do, you have sub-menus under sub-menus under menus for all different facets of running a First World country or controlling a grand navy. These are often the kind of games your friend's dad played that you looked at as a kid and thought you needed a masters degree in Political Science and Computer Engineering to play. These games often had a VERY loyal but small fan base who played every iteration of these games until the studio went under or got bought out.

As the Grand Overlord Dictator of the Rules (a.k.a. the last one to "nose-goes" on the dreaded job of writing rules from scratch, I've literally never written game rules before in my life), my approach was to make the game as accessible as possible to all ages and skillsets while maintaining the ability to min-max to your heart's content.

On a team with five other viewpoints and opinions, it's really easy for a game to spin out of control with extra features and possibilities that, little-by-little, turn the game into an overcomplicated mess. Taking all of these ideas and possibilities and running them through the "simple on the surface but as deep as you you want to dig" colander, yielded a pretty clear and agreeable final set of rules and features.

If everything works perfectly, a newcomer will be able to play a quick tutorial or get a quick rundown on the rules and understand that they have Units they can do stuff with, stuff costs mana, kill the opposing Units, capture the points, and win the game. While at the same time, they can play against someone who has played two thousand games, knows the best Units for the meta game they're trying to play, how each of these Units can be played together to reach their highest possible potential while thinking 15 turns ahead and plotting the grand set of moves that can win a game without ever losing a Unit.

Simple on the surface but as deep as you want to dig.

Will Any of This Work?

Hopefully. It seems to work okay for now but then again, only about 20 people have played or even seen our game at this point so all of this confidence in our current game could fly out the window as soon as someone realizes that if you have these four cards in your hand you can play them in a certain order and win 100% of the time. Only time will tell.
at November 04, 2018